Only those who have experienced an earthquake firsthand can fully understand the emotions and suffering caused by such a catastrophic event, as well as the desire to rebuild of those affected and the difficulties encountered along the way. It is precisely for this reason, and in memory of the 1976 earthquake in Friuli, that the Consortium of Prosciutto di San Daniele undertook the promotion of a mission of solidarity for the benefit of the municipality of Poggio Rusco, which was so severely struck by the earthquake of 2012. 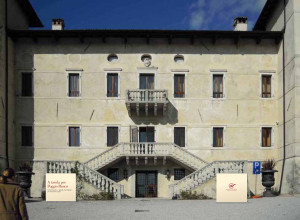 The little town in Mantua Province had, in fact, suffered very serious damage, in particular in the old town centre, where substantial parts of the Chiesa Parrocchiale, the Palazzo Municipale and the Torre Falconiera had collapsed. There was also massive damage to private housing, estimated at over ten million euros, with over 200 homes severely damaged or rendered unfit for habitation, and more than 300 people evacuated.
The beautiful Castle of Susans in Majano formed the backdrop for the day of solidarity with its theme of “A Tavola per Poggio Rusco” (Sitting at the Table for Poggio Rusco). This gastronomic tour of the region saw Michelin-starred chefs Andrea Canton, Alberto Tonizzo and Romeo Sturma busy with their pots and pans, under the lead of Emanuele Scarello. The initiative, which succeeded in raising 40,000 euros, was also attended by a delegation from Poggio Rusco made up of Mayor Sergio Rinaldoni, Deputy Mayor Fabio Zacchi, and Stefano Berni, Director of the Consortium for Grana Padano Cheese and co-organiser of the event together with ERSA (the Regional Agency for Rural Development of Friuli–Venezia Giulia) and the Chaîne des Rôtisseurs.