This simple statement sums up the approach of Mario Dondero, one of the most original of Italy’s photojournalists. Born in 1928, and always the pioneer, Dondero 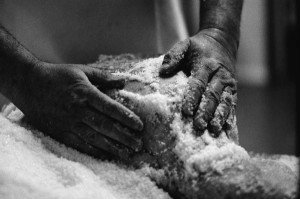 has left, amongst other things, an indelible mark on documentary photography. Referred to as “the intellectual of the image’, Dondero has always distinguished himself for his clearly recognisable, original and eclectic style. The social and civil commitment of his reports are memorable, from the use of torture in Algeria to the Russell Tribunal in Stockholm, up to the operations of the NGO Emergency in Afghanistan. All, without fail, faithfully depicted in black and white.
Monochrome is likewise the chosen medium for Dondero’s photographs of San Daniele which, together with those taken by Marco Signorini, make up the book San Daniele del Friuli. Nature, people, town, prosciutto, edited by Antonio Giusa.’ Dondero’s study, which encompasses the landscape, community and areas where prosciutto is produced, is narrated via powerful, straightforward images. His camera meticulously captures every tiny detail, but most of all it attempts to attune to places and people, turning them into seasoned friends, a snippet of the photographer’s own life, experienced with empathy and intensity. This affinity can be perceived in every picture and accounts for their living, breathing realism. The localities are not scrutinised for their beauty, but for their significance in the lives of the people who live there.
Dondero’s p 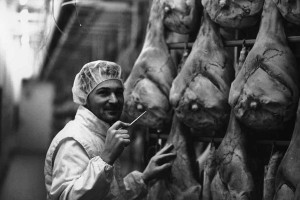 hotography is not straightforward, but an outright dissection of the soul, with portraits that explore and probe the depths of the human being.
From 19 December 2014 to 22 March 2015, in the Great Halls of the Diocletian Baths in Rome, the ‘Mario Dondero’s Long Century’ exhibition will be open to the public, displaying 250 photographs from the Milanese photographer’s long career.